Plant a tree in memory of Eric
An environmentally-friendly option 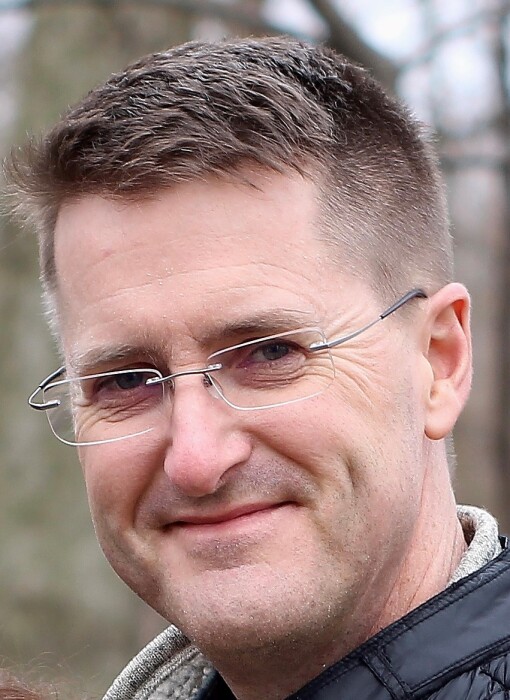 Eric R. Weber of Fletcher, North Carolina, formerly of Morton, Illinois, bravely battled brain cancer for three years. He passed away peacefully in his home while surrounded by family, into the arms of Jesus, on April 5, 2021 at the age of 49.

Eric was born on December 28, 1971, in Pekin, Illinois. He graduated from Pekin High School in 1990, and married Jennifer (Parkinson) on January 25, 1992. He pursued his education while serving in the United States Navy for 6 years, and graduated from Illinois State University before earning his Masters degree at Bradley University. He was the CEO for both Central Illinois Radiology for many years, and for Asheville Radiology Associates for the last three years. He was a member of several professional organizations and attended Ridgeline Church of Asheville.

Eric was a beloved husband, father, papa, son, son-in-law, brother, uncle, coach and friend to many. He spent countless years coaching his sons and the Morton Dirtbag baseball teams. Eric loved to fish, golf, hike, watch sports and spend time with family and friends. He was a man of ambition, passion and a genuine love for people. He had the ability to make everyone he came into contact with know that they were seen and valued. His loss will leave a hole in the hearts of everyone he knew.

Eric's family was his whole world, and he was theirs. Although cut short in years, he lived a full life that he and his family are proud of and will carry on in the way he taught them. He is survived by his wife of 29 years, Jennifer; his children Tyler (Claire) Weber, Emilee (Jaylen) Guy, and Isaac Weber; his grandson Callahan Weber; grandmothers -in-law Shirley Hazen and Joyce Parkinson; parents Ron (Marcia) Weber and Deborah (Virble) Stubbs; parents-in-law David and Victoria Parkinson; siblings Angie (Penni Harris) Thewlis, Bret Weber, Ronald (Elena) Weber and twin brother Chad (Tanya Ary) Weber; sister-in-law Marcy George and many nieces and nephews. He was preceded in death by his maternal and paternal grandparents and his great niece, Olivia.

Cremation rites have been accorded by Western Carolina Mortuary Service. Military rites will take place at McDonald Field (varsity field) at Westwood Park baseball fields in Morton, Illinois on Sunday, April 18 at 2:00. An informal service, Masonic rites and a celebration of life will immediately follow at Red Rock Bar & Grille in Morton. In lieu of flowers, contributions can be sent to Jennifer Weber to be deposited into an education fund for Isaac's final year of college. Donations can also be made to the Morton Youth Baseball Association in Eric's honor.

Plant a tree in memory of Eric by clicking here.
To send flowers to Eric's family, please visit our floral store.

A service summary is not available

Plant a tree in memory of Eric
An environmentally-friendly option

Plant a tree in memory of Eric

1 tree planted in memory of Eric

A Memorial Tree was planted for Eric R. Weber

We are deeply sorry for your loss ~ the staff at Western Carolina Mortuary Service, LLC
Join in honoring their life - plant a memorial tree

Plant a tree in memory of Eric